Navigation Lesson #8: Micro-Navigation Route Choice. Route choice is establishing a planned flow for the race at both a macro-navigation level (major movements between transition areas) and a micro-navigation level (moving between two checkpoints or tying together a series of checkpoints usually on foot). Route choice is done both in pre-race planning and adjusted on the fly during the race as the course unfolds before you and real-life observation, navigational errors, timing, etc. cause you to adjust your pre-race route choice.

For micro-navigation, factor in speed of travel, straightline bearing vs. terrain-guided travel, use of trails, thickness of vegetation, elevation, terrain definition, presence of other teams (they usually mess with your plan but can be extra sets of eyes), confidence, risk/reward. 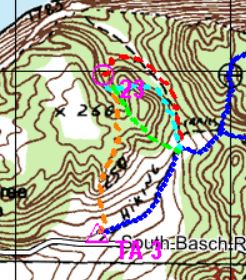 A good example of micro-navigation route choice is the infamous CP 23 from the Sleeping Bear Edition several years ago. Fairly closed in by vegetation, the CP was made more difficult because it was the first one of the race for many and teams followed other teams rather than take a breath and develop their own plan. Group think is a killer in AR. Here are four micro-nav routes successful teams used to get to 23 from the TA.

Orange: For those of you new to AR, consider taking a straight bearing to 23. It will probably take longer since you aren’t using trails, but you should be able to easily find the top of the reentrant where 23 is located (reentrant is covered over a bit by the route lines I’ve drawn in but it was clear). From there, it’s a careful walk down the middle of the reentrant. If you have a teammate, spread out a little but focus on the lowest point of the reentrant where CPs are almost always placed unless the circle is clearly above the lowest contour line.

Green: You can run up the trail but as soon as it goes east, take a NW bearing to the top of the reentrant. Climb the spur. Drop down the reentrant like with Orange.

Blue: Continue through the broad valley, heading mostly north. As you approach the highest hill to your west, wrap around its northeast side, head west and then climb over the spur into the reentrant. “Aim off” to the south/left of the reentrant so that you only have to trek downhill/north to find it.

Red. Wrap all the way around the hill and spur, curling into the reentrant from the northeast. Make sure you curl in where the land is relatively flat so that you only have to trek uphill/south to find it.

There’s no one right away to find a CP in may instances but following other teams is usually a wrong way. Also, if you are spending more than 10% (30 minutes) of your time on a single optional CP, it’s probably time to move on. Cut bait and target another fish.