The first rule of navigation is to always know where you are on the map. You can’t get to where you want to go if you don’t know where you are. Until you develop the skill and confidence to move along without your compass bearing, it’s important to get that bearing right. Ideally, share the bearing degree with an additional teammate who can follow along with their compass, particularly when the distances between the two control markers (checkpoints) is long and errors are multiplied, or conditions are such that it’s easy to get off bearing such as marshland or thickets that require you to go around them.

As many of you have learning from basic compass education, you can increase your speed while using a compass by pointing it (using the direction of travel arrow on the baseplate) toward a tree or other object as far in the distance as possible and moving quickly toward that object. Don’t bother to look at your compass again until you get to that object then repeat the process with your compass. Trying to constantly keep your magnetic needle in the orienteering arrow (red in the shed) will result in a less accurate bearing and a greater chance of injury.

At times you may need to move off from your bearing and then return back to it. You’ll need to visualize the bearing line as it cuts across an impassable obstacle so you can return to that line once you go around the obstacle. For example, at a lake or swamp, point the compass at a feature on the other side and then make sure you wrap around the water feature until you return to that spot where you are back on bearing. Or, at a large hill that will sap your team’s energy to climb, you may decide to wrap around the hill and do your best to stay on bearing on the other side. At the far end of the lake or hill, you may decide to scrap your bearing and just rely on reading the topo map until you reach the checkpoint (CP) depending on how defined the features are. For teams inexperienced with navigation, you may decide to just climb the hill (but swimming the lake or swamp is rarely advisable!) to stay on bearing, taking the slow, sure route instead of the fast but somewhat unknown way. In time, it’s important to develop the confidence and skill to mostly eliminate this slower method. 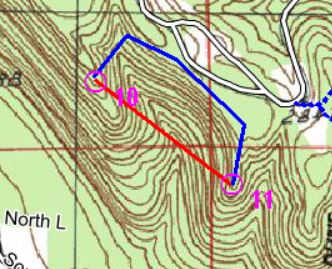 Here’s an example, but instead of a hill we have a massive valley between two CPs (at the Sleeping Bear Dunes Edition in 2016). If you look purely at distance as the crow flies, you would take the red route. If you looked at distance, factoring in the down and up distance, you would still take the red route. But if you factor in the slower speed and major energy depletion (and risk of injury) of dropping way down to the bottom of the valley and climbing back up the other side, you would clearly take the blue route even though you will have to do the route without the straight bearing you are most comfortable with and at a longer distance.

You can see that travel along the top of the ridge is much flatter. Even though you’re not on a bearing, it’s really easy to follow the ridge along and the turn toward the south as the ridge bends into a spur that points you right down to the checkpoint. And you’ll encounter less vegetation (less water on ridges to grow plants), and less deadfall – trees that die will have fallen down off the ridge… blocking the way of the teams that have made the poorer route choice!